Last Updated on 2 years by Touhid

Encryption is the process of encoding a message using an algorithm to transform message that only authorized users can access it and make it unreadable for unauthorized users.

Encryption method protects sensitive data such as credit card numbers by encoding and transforming information into unreadable cipher text. This encoded data may only be decrypted with a key. There are two types of primary keys are used for encryption such as Symmetric-key and Asymmetric-key.

The overall key benefit of encryption is information security. However, there are many benefits that encryption could bring to your organization. If you are considering encryption for your business, you should take these benefits into account before making your decision.

In symmetric encryption process, both sender and receiver share the same key for message encryption and decryption.

This is the simplest kind of encryption that involves only one secret key to encrypt and decrypt information. It is an old and best-known technique.

In this technique, sender uses the secret key to encrypt (cipher text) the message before sending it to the receiver. Once receiver receives the message it can be decrypted using receiver secret key, returning it to plaintext.

Asymmetrical encryption is also known as public key cryptography, which is a relatively new method. It increases the security of the encryption process by utilizing two separate but mathematically related keys known as a public key and a private key to encrypt and decrypt data. 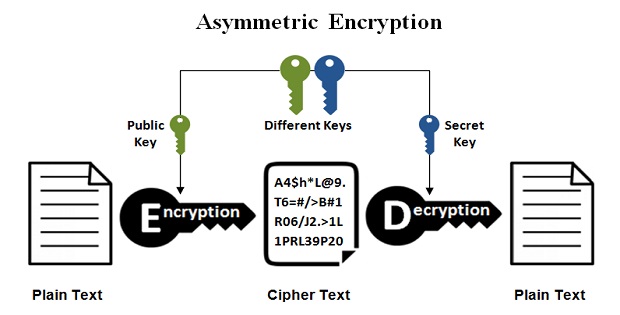 In this technique, both sender and receiver have two keys (public key and a private key) of their own.

How does encryption work

When a sender wants to send a message to receiver so, before sending the message was encrypted by a secret key.

In that case, sender uses an algorithm to scramble, or encrypt the message. It is then transmitted to the receiver, who is able to decode the message with a key.

There are many types of algorithms (Such as AES, MD5, and SHA 1 etc.)  are used to encrypt and decrypt the message.

Encryption algorithms are commonly used in computer communications, including FTP transfers. Usually they are used to provide secure transfers.

Here are some commonly used algorithms: