Last Updated on 12 months by Touhid

Computer networks are the very basic of information technology (IT). Computer networking refers to the connected with one another computing devices such as laptops, desktops, servers, and others. In this post, we will discuss on What is Networking of Computer.

What is Networking of Computer?

What is Networking of Computer? Computer network is a system where multiple devices are interconnected for the purpose of sending and receiving data, file or resources. The computer device also known as hosts which are accessible over a network.

Computer network is a set of computers or group of computers that are connected with one another for the purpose of resource and information sharing. The resource can be file servers, documents, storage, printer sharing and others. The computers are connected via cabling such as fiber optic cable or Ethernet cable or also with wireless (Wi-Fi) connection.

We have defined What is Networking of Computer ? Now, we will focus the important features of computer network. There are several features or characteristics of a computer network such as File sharing, Security, Scalability and Reliability.

Learn more about Types of Network attack and Prevention.

File or resources sharing is one of the main features of computer network which provides us to share the resources from one computer to another. We can connect a printer, scanner, or fax machine within the computer network and can use the machines over the network.

Learn more Why is it Important to Protect Your Personal Information.

For example, I have software company called “X”, and there has 20 employees. Each has a computer and connected over a network. If I hire more 5 employees and want to add new 5 computers within the existing network so, my office network should have scalability to add new computers.

In computing network, the device may be damaged or does not work properly so, it can impact on the entire network system. In that case, develop an alternative solution for data communication between sender and receiver. 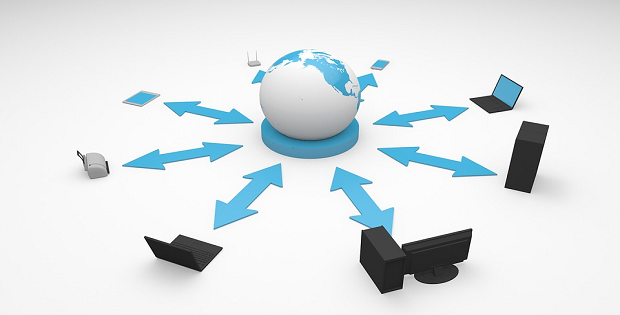 What is Networking of Computer Systems ? In Computer Systems, local area network or (LAN) is a computer network that connected together in physical limited area such as office building, school, university or home. Typically, a LAN is consist of different components such as access points, cables, routers, and switches which are connect with application servers, web servers, storage’s and other LAN’s.

A LAN may contain hundreds or even thousands of computers in an office building. LAN allows users to share and access the storage, document, printers, applications and resources within the network.

There are two types of local area networks, which are as follows:

On a peer-to-peer network architecture, each device directly connected to a switch or router and shares data to other devices. In this architecture, there has no central server to share and receive data from another device. This network is very small; it is used in home network. 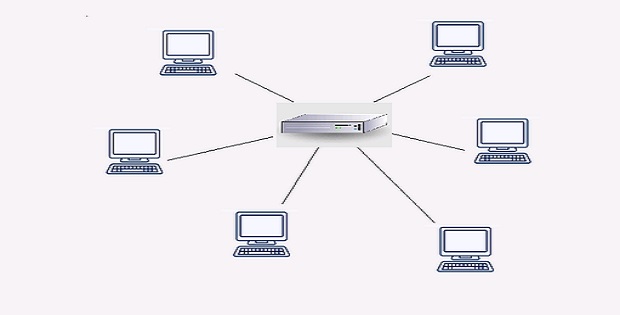 There are several advantages of using LAN, which are as follows:

I. Ease of Setup

To set up a LAN is very easy; just need cables, computers, printers, switch, router, server and internet service. You can easily add or remove a device from LAN and there has no limit to add new users in LAN.

In local area network, computer resources are share by connected devices; the resources may be software’s, printers, scanners, and hard disks. By sharing the resources LAN reduce the network and hardware cost.

The data of all users are store on a central server; so user can access these data from any computer connected within the network. The flexibility, efficiency will be increased and required storage servers will be decreased by storing all data into a central server.

Speed is one of the main advantages of LAN which provides the high speed of all users for uploading and downloading the resources.

In LAN, data is easy to manage and access because all data are stored at only one central server. So, security can be ensure and maintain by implementing administrative access rules and policies.

The local area network has some disadvantages, which are as follows:

If the central server is not properly secured then unauthorized users may access the server to get the important data or damage the data. Even, if a computer infected by a virus then, it quickly may spread to others computer within the network.

The sizes of local area network are limited within a building or group of nearby buildings, which cannot extent to wider area.

If the central server is corrupted or fails to operate then all users connected within the network cannot access the application programs.

To setup and maintain a local area network is expensive because there need different types software and hardware devices such as server, switches, routers and Ethernet cable.

Personal Area Network or PAN is a networking of computer that connects multiple devices within the range of an individual person. The device can be computers, phones, tablets, printers, keyboard and other devices such as speakers or electronic devices. The range of personal area network is limited typically within 10 meters (33 feet). 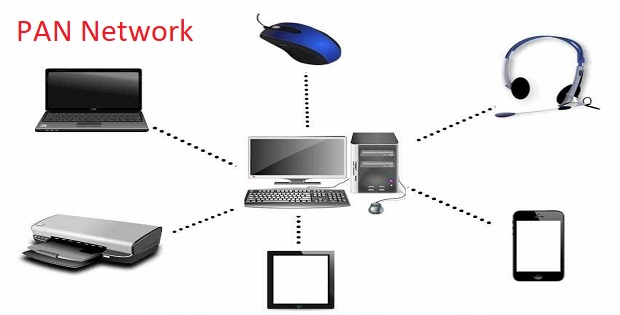 The connection types of PAN may either wired PAN or wireless PAN. The details are as follows:

The connection method of Wired PAN is using cable such as USB (Universal Serial Bus) or FireWire.

The connection method of Wireless PAN is including signals such as Bluetooth, WiFi and Zigbee.

The body area network related to mobile network of a person, which moves with that person. Simply, a person creates a network connection to share data to another device.

An offline network or home network is connected with multiple devices such as printers, computer, television and speakers through Bluetooth or Wi-Fi.

There are some advantages of personal area network, which are as follows:

There are also some disadvantages of using personal area network, which are as follows:

The range of a MAN is 5 to 50 kilometers, where several building can include such as school or college campus, canteen, and office buildings.

It has designed for those users who need a high-speed connectivity for resources sharing. Typically, it is very complex to setup and maintenance of metropolitan area network.

The WAN consists of different types of components such as routers, switches, Fiber, Wireless, Microwave or Satellite and customer premises equipment (CPE). 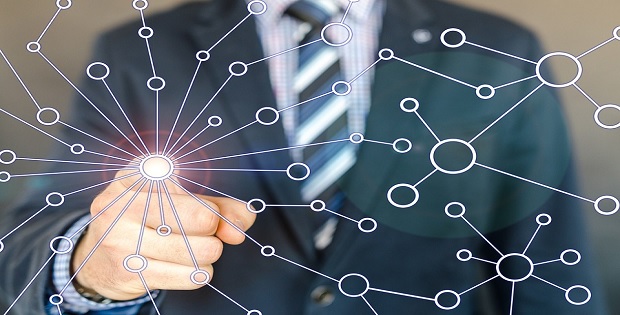 The best known and most used example of WAN is Internet, which covers large geographical locations and used to transfer files on the internet.

There are a number of different technologies that how we can send data on a wide area network:

There are several advantages of WAN, which are as follows:

The main problem of WAN is security, when many users have permission to access the information. It is required many technologies to setup a WAN, so there has chance to a security gap.

There are also some disadvantages of WAN, which are as follows:

Finally, Networking of Computer is a group of computers that are interconnected with each other in order to share and access the resources such as storage’s, printers, files and CDs. In this post, we have discussed “What is Networking of Computer” and different types of computer network also with their advantages and disadvantages. Hope the article will be helpful for you!!!